The Chord Mojo turns good headphones into great ones

Audio processing isn’t sexy. Better sound doesn’t lend itself to easy marketing through numbers or pretty posters, and so many companies treat it as an afterthought when designing their products. The blissful ignorance of “good enough” audio pervades the world of consumer technology, leaving only a niche of audio enthusiasts supporting a few boutique hi-fi manufacturers. Things have been like this for quite some time, but recently a new gadget was introduced that bridges the gap between the many and the few, and its name is the Chord Mojo.

The Mojo is an audio processor and amplifier that’s smaller than a pack of cards yet delivers the awesome performance of much larger rivals. Honestly, I think its size works to its disadvantage because it looks like, and is, a portable unit you can plug into your phone and use off its 10-hour battery. By audiophile standards, it’s almost too practical. But those same audiophiles would struggle to find anything to complain about from the Mojo’s sound output, which is as pure and crystalline as that of digital-to-analog converters that cost multiple times its $599 price (such as Chord’s very own $2,195 Hugo DAC). The Mojo fits the performance of VCR-sized audio equipment into a shirt pocket. If it were a graphics card, it’d be an Nvidia Titan X priced at $100 instead of $1,000.

Listening to the Mojo is this product’s best sales pitch. I can tell you that it has a dynamic range of 125dB, a total harmonic distortion of 0.00017 percent, and a max sampling rate of 768kHz, but those numbers won’t convey the qualitative difference and impact of this DAC. The Mojo just makes everything sound cleaner and clearer, and the improvements it makes over a conventional digital music source are stark enough to be noticed even without hi-fi headphones. Today I’ve been listening to the Mojo with a pair of $199 u-jays on-ear cans and the Galaxy Note 7 — the Mojo expands the soundstage, makes vocals sound more human, and simply presents a much smoother, more coherent performance of Rick Ross’ Port of Miami. The u-jays are good headphones, with a pleasant bass bump, that become great when plugged into the Mojo. That’s just what the Mojo does.

You can hook the Mojo up to a Mac via USB without the need for drivers, and the same is true for Android devices via a USB On-The-Go cable and iPhones and iPads via the Lightning adapter kit. One bit of weirdness I encountered when setting the Mojo up was that it wouldn’t play back audio from the Chrome browser, which I found out was an issue with its ridiculous sampling rate: lowering that down to 384kHz resolved the issue. Windows PCs need a driver download, but after that, the Mojo is quite effortless to use.

There’s one big bulbous power button, two volume controls, and no superfluous extras. I’m a big fan of the illuminated balls used to control the Mojo: they rotate in all directions, give the device a nice bit of color, and have the perfect tactile response. They’re also informative, indicating the volume level in small increments going from red through yellow to blue. It’s definitely a quirky design, but it’s functional and adds to the Mojo’s character. Also nice is having two headphone outputs at the front, making it easy to share music or a movie (or, alternatively, to obsessively compare different headphones using the same source). 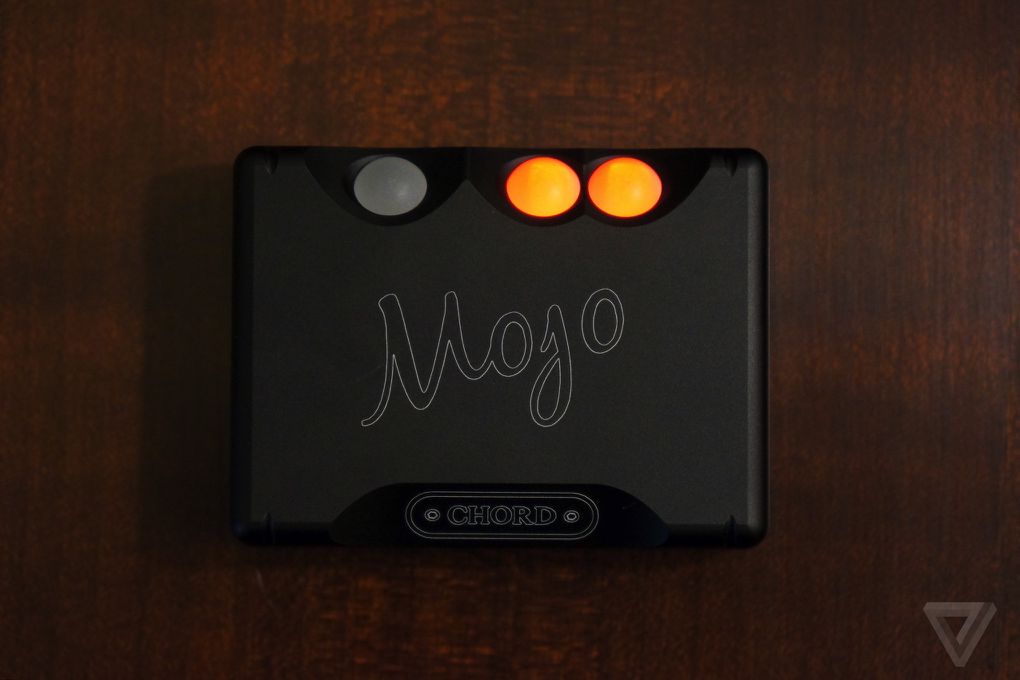 Beside its faultless sound, the Mojo is also built to a very high standard. It’s machined out of a single block of aluminum and has the heft and rigidity to withstand a lot of punishment. This is a true mobile device. The only thing that might give you pause is how warm it gets while charging, but that’s never caused me any issues and I suspect the heat is something the designers at Chord have already accounted for.

The thing that makes the Mojo disruptive for its industry, though, is how good it is at powering the most demanding, high-end headphones. This little device can scale all the way from tiny in-ear buds to the weighty planar magnetic cans from the likes of Audeze and HiFiMan. I have used it, without the help of an external amplifier, to power the Focal Elear and Utopia as well as the MrSpeakers Ether Flow. The latter is a quite terrific pair of headphones, but its excellence can’t be tapped with my usual portable DACs like the DragonFly or Oppo HA-2. You need a serious desktop DAC and amp to drive the Ether Flow, and that’s exactly what the Chord Mojo is.
Renders a ton of hi-fi gear superfluous

At a recent CanJam event in London, it was striking for me to see how many audio manufacturers had Mojos on their stand. Dan Clark, the titular MrSpeakers, was showing off his new $1,800 headphone models using the Mojo as the DAC, though admittedly he also used a $799 Cavalli Liquid Carbon amplifier as well. But my point is that you don’t really need to spend the extra cash for the amplifier: I haven’t hit the Mojo’s max volume with any headphones I could get my hands on. The Mojo and the Tidal streaming service are the most popular extras everyone is using to show off high-end audio gear because of how convenient they are. For my purposes, it’s pretty incredible that I can enjoy the big and mighty Ether C Flow headphones on the move, powering them only with a Note 7 and a Mojo.

The Chord Mojo is highly regarded in audiophile and professional circles, but I still think it’s underrated. What this device represents is so much bigger than just another enthusiast trinket. Offering precedented versatility, the Mojo is both a portable upgrade and a formidable desktop DAC and amplifier. Sure, its price might be high for something seemingly optional, but you only have to buy a Mojo once — it’s compatible with any source or headphones you might throw at it, and its supreme sound quality won’t go obsolete any time soon